Sonnet to a Potato

A couple of weeks ago, I found inspiration for a couple of poems in response  to the found photo prompts at Laura Shovan’s blog (where the fun continues).  A photo of a “Loaded baked potato” was the prompt for February 14th.  That photo plus the fact it was Valentine’s Day and love sonnets were in the air of my brain inspired “Sonnet to a Potato,” a parody of the classic “How Do I Love Thee?”  by  Elizabeth Barrett Browning. (You can read the original HERE).

Collage from photos at pixabay.com

Sonnet to a Potato

(With apologies to Elizabeth Barrett Browning)

How do I love thee? Let me count the ways.
I love thee boiled, peel-mashed, deep fried as chips
in gravy drowned, sweet, baked, spiced hot with dips.
I laud thee for thy subterranean days,
thy secret growth all hidden from sun’s rays.
Fair starchy flesh, thou’rt comfort to my lips.
They calories they fortify my hips.
Sweet staple nightshade fruit, I give thee praise
for skin of white or yellow, russet, red
for Yukon Gold, Kerr’s pink, purple or blue.
Thou give’s thyself in pancakes, latkes bread
skins, salads, hash browns, scalloped, soup and stew.
Though sometimes called tater or spud instead
to thee, Potato, my taste buds stay true!

This post is linked to Poetry Friday, where you’ll find all kinds of delectable poetic fare. PF is hosted today by Elizabeth Steinglass.

Loveliest of trellis the chervonets now
Is hung with blooper along the boulder
And stands about the woolpack ridicule
Wearing whitleather for easting.

Now of my thresher yeast and tenancy
Twig will not come again.
And take from severalty springer a scorpion
It only leaves me figment more.

And since to look at thinker in blooper
Figment springer are little root
About the woolpack I will go
to see the chervonets hung with snuggery.

My huge apologies to A. E. Housman, who wrote the original

(which I present to you now, along with a tree to match): 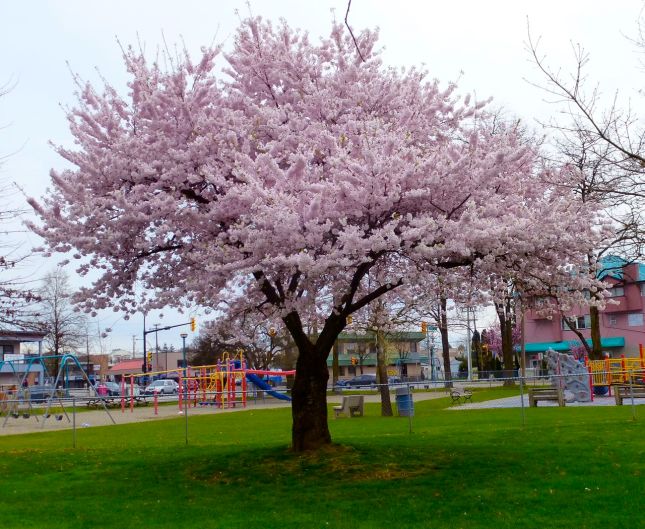 Loveliest of Trees, the Cherry Now

Loveliest of trees, the cherry now
Is hung with bloom along the bough,
And stands about the woodland ride
Wearing white for Eastertide.

Now, of my threescore years and ten,
Twenty will not come again,
And take from seventy springs a score,
It only leaves me fifty more.

And since to look at things in bloom
Fifty springs are little room,
About the woodlands I will go
To see the cherry hung with snow.

************
National Poetry month made me do it—make a travesty of Mr. Housman’s lovely poem. Actually, it was inspired by the April 10th prompt on the Poets & Writers site:

Write a poem using the N+7 form, conceived of by the French poets of the Oulipo movement. Choose a text and replace each noun in that text with the noun occurring seven entries below it in your dictionary. Next, try the exercise with one of your own poems.

What is the Oulipo movement? According to Wikipedia, Oulipo was short for a French phrase roughly translated “Workshop of potential literature.” The movement consisted of a group of French-speaking writers and mathematicians who sought to create literary works using constrained writing techniques.

Some other Oulipo constraints:

Snowball
A poem in which each line is a single word, and each successive word is one letter longer.

Lipogram
Writing that excludes one or more letters. The previous sentence is a lipogram in B, F, H, J, K, Q, V, Y, and Z (it does not contain any of those letters).

Univocalism
A poem using only one vowel, although the vowel may be used in any of its aural forms. For example, “born” and “cot” could both be used in a univocalism, but “sue” and “beau” could not.

This post is submitted to Poetry Friday, hosted today by Irene Latham at Live Your Poem where you will find a  wealth of wonderful, proper, and no doubt some more silly poems too.

Posted by Violet Nesdoly on April 18, 2013 in Light, Poetry Friday