My One Little Word for 2018 is/was FOCUS. I wrote about what I expected my focus on FOCUS to do for me back on January 4th, and did a mid-year evaluation on July 5th.

Since then I haven’t actually dwelt on my OLW a whole lot. But reading these two posts and looking back over the year helps me see that focus has, in some small way, actually become part of my DNA—though I could still do much better. 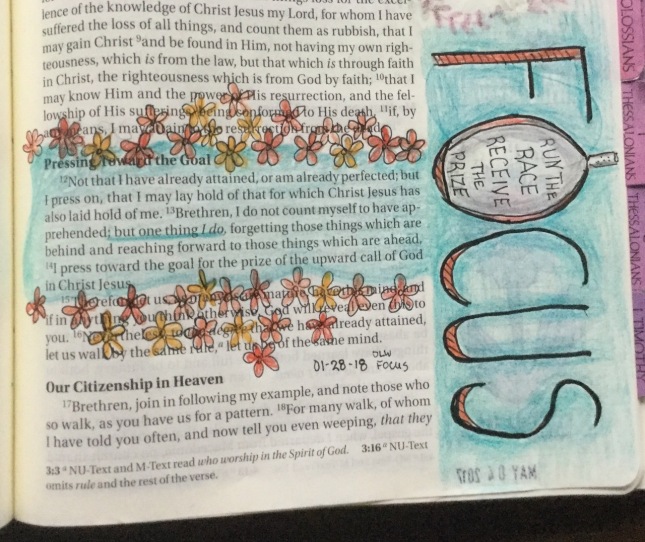 A Bible Journal doodle I did on the word FOCUS, in January, 2018.

In September we took the trip to the Canadian Maritime provinces that I was dreaming of back in July. Before our trip I focused on getting ready. During our holiday I focused on the sights, sounds, smells, tastes—all the wonderful moments of exploration and discovery.

When we got back home, I kept my promise to myself and again picked up and focused on the fictional story I’ve been writing (in some form or other since 2014). I’m thrilled to announce that the first draft is nearly done!

Something I do to help me focus on this project (and others) is to set my iPad timer for the amount of time I plan to work on it (for this one 90 minutes a day, four days a week). That somehow frees me to dive in and get immersed in the work without the distraction of looking at the time.

Another focus trick I use is to treat myself after onerous tasks. Treats are things like drawing, painting, doodling, or reading (not food!).

My one little word for 2017 was LISTEN. I was sad to leave it behind. But I didn’t—at least not completely. I have found that habits I formed during my year of LISTEN are still with me. (For example, in conversation, when someone cuts in and begins to talk over me, I immediately stop talking and listen—something I trained myself to do last year when I was trying to become a better listener).

Similarly, I hope that habits I’ve formed this year under the influence of FOCUS will prove to be just as sticky.

And now, it’s time to focus on Christmas. To all of you—have a very blessed one!

January 2018 seems like just yesterday in some ways—and like a long time ago in others. As I look back and ahead, here in the middle of the year, I see several trends.

My one-little-word for 2018 is FOCUS. I began to put that word into action early in the year by cutting out some activities and routines. One of them, you Poetry Fridayers may have noticed, was to withdraw from posting a weekly poem and linking up with Poetry Fridays. Indeed, my poetry-writing has taken a back seat to other things this year.

The interest in doodling, drawing, and lettering that was ignited when I discovered Bible art journaling last spring, has continued to grow. Joining Instagram earlier this year (@vi_nez), has challenged me to grow even more as I’ve discovered amazing artists whose work I admire. It seems to me that at some level, drawing uses similar mental, emotional and intellectual brain pathways as writing (especially writing poetry) and so my urge to create has been absorbed in this new-to-me art form. 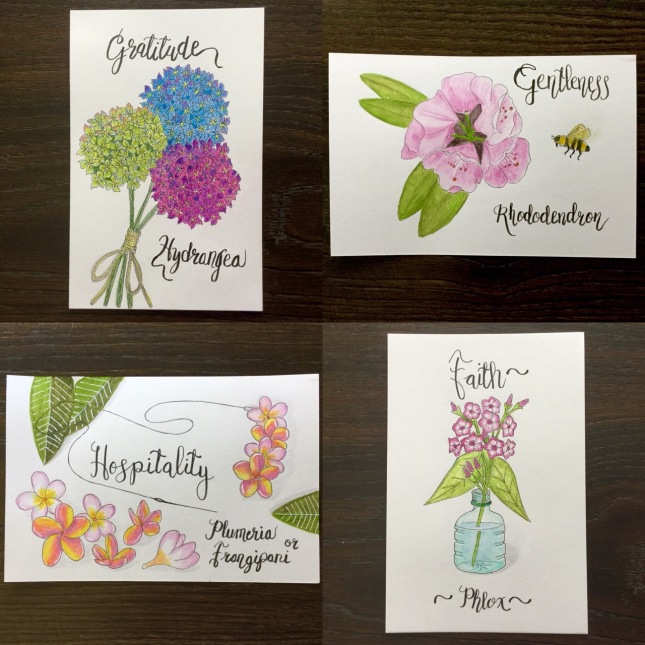 In June I took part in a flower-drawing challenge (we were given the names of 15 flowers to draw; lettering/words were at our discretion if at all). I chose a Christian quality as a title for each of my flowers. Here are four that I did.

Finish what I start

One writing project that I continue to work on is a novel—a sequel to the Bible fiction I published in 2012. That book (Destiny’s Hands) fictionalizes the story of the Bible character Bezalel. He was singled out for the job of making the Tabernacle and crafting all its worship accessories (along with many helpers—see Exodus 31:1-11). In Destiny’s Hands, I follow Bezalel from the Egyptian craft guild, where he works for Pharaoh, to the time he receives his assignment from Moses.

In the sequel (my working title is Under the Cloud), I follow his sister (a purely fictional character) through the rest of the exodus, taking her and her family to the border of the Promised Land.

I’ve worked on this project for several years and still don’t feel I’ve researched enough. But a while ago I decided enough of that, better get writing. I am about two thirds of the way through (53,000 words Monday) what I’ve planned. I’ve been beavering away at that project for most of this winter, doing 90 minutes a day four days a week.

During the summer months I’m going to shelve that project but am determined to take it down again when we get back from our travels. My goal, at this point, is to simply finish a first draft. It may never get published, but I will finish writing it.

Our summer vacationing starts next week with trips planned to see our children and grandchildren and hopefully take a meander through Canada’s maritime provinces after the summer rush. We’ll see. 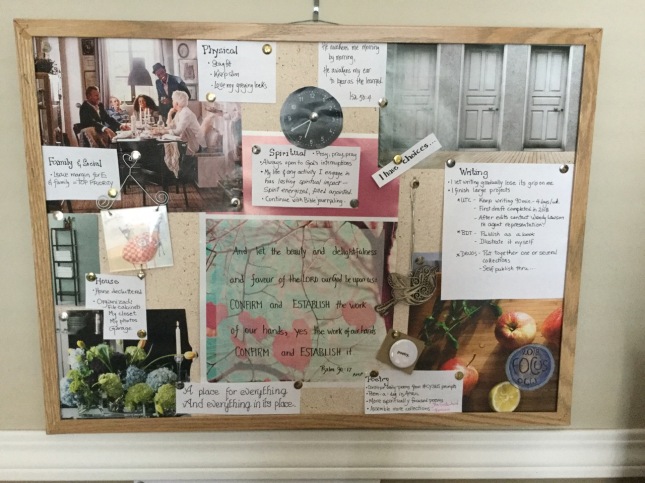 Early in the year I was part of an artist mentoring group. In that group we were encouraged to create a vision board. Here is a photo of mine. It addresses various aspects of life and I think it might be time to update it.

I’m loving the creative shot-in-the-arm I’ve received from taking up art journaling, drawing, and lettering. It’s a lot of fun to learn new things! At this point I have no ambitions for this new venture but to learn it. My writing I hold loosely too. I put all these things under the umbrella of a Bible verse I chose for the year:

“Not that I have already attained, or am already perfected, but I press on, that I may lay hold of that for which Christ Jesus has also laid hold of me. … One thing I do, forgetting those things which are behind and reaching forward to those things which are ahead, I press toward the goal for the prize of the upward call of God in Christ Jesus” – Philippians 3:12-14 NKJV 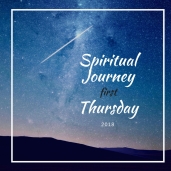 This post is part of Spiritual Journey Thursday, a link-up with other bloggers who write about their lives and work from a spiritual perspective. Doraine Bennett is hosting our link-up this month. Visit her at her blog Dori Reads.

Welcome to the first Spiritual Journey Thursday post of 2018. Today I and my SJT friends are unveiling our one-little-word choices for the year. My trusty altar-ego Power Shot is here to do the honors in a storyboard sequence. Take it away, PS! 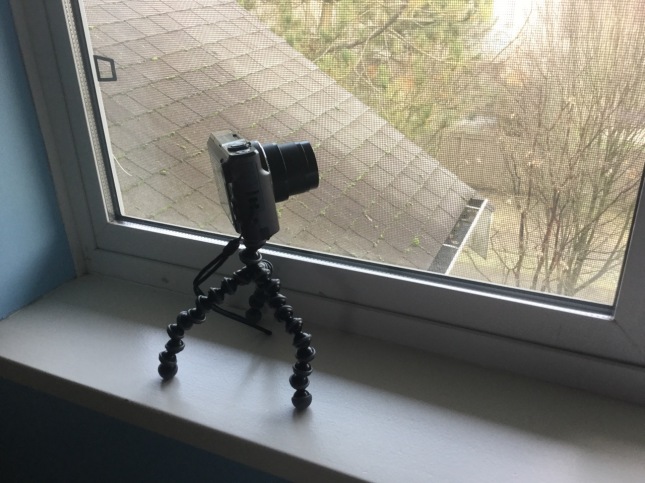 Life is full of so many lovely distractions. 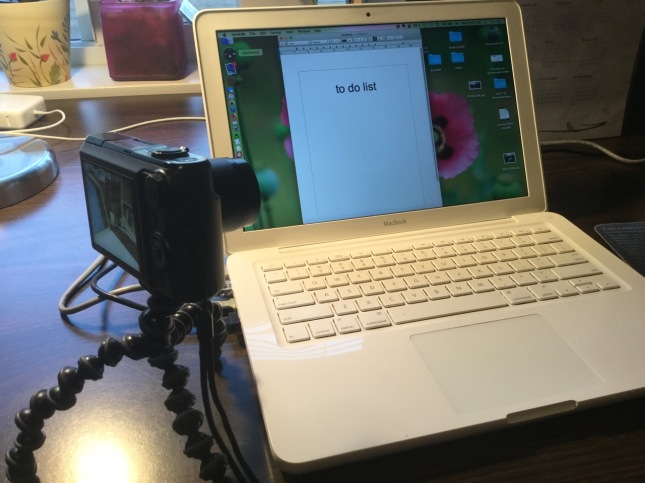 But now it’s time to get to work… 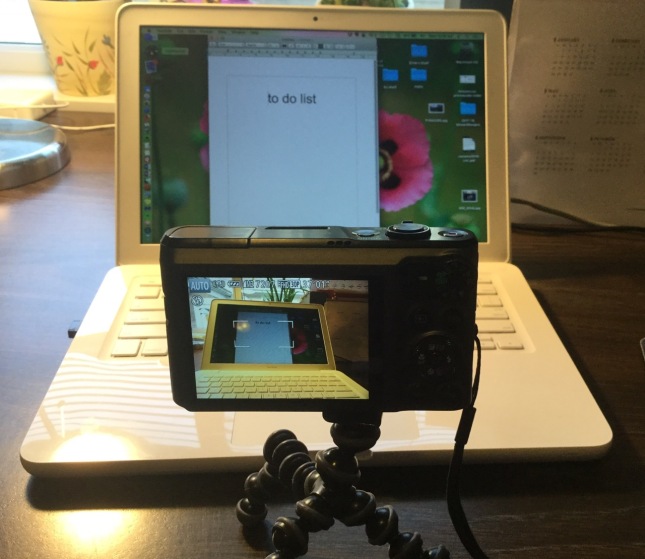 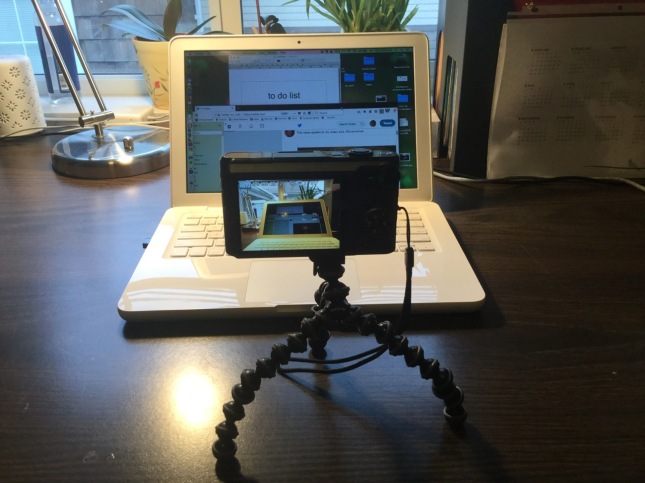 Wait. I need to see what’s happening on Twitter… 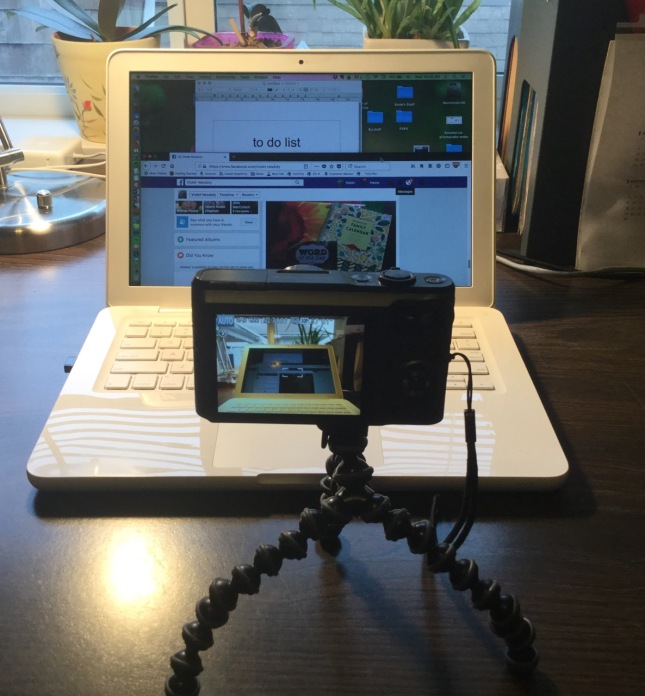 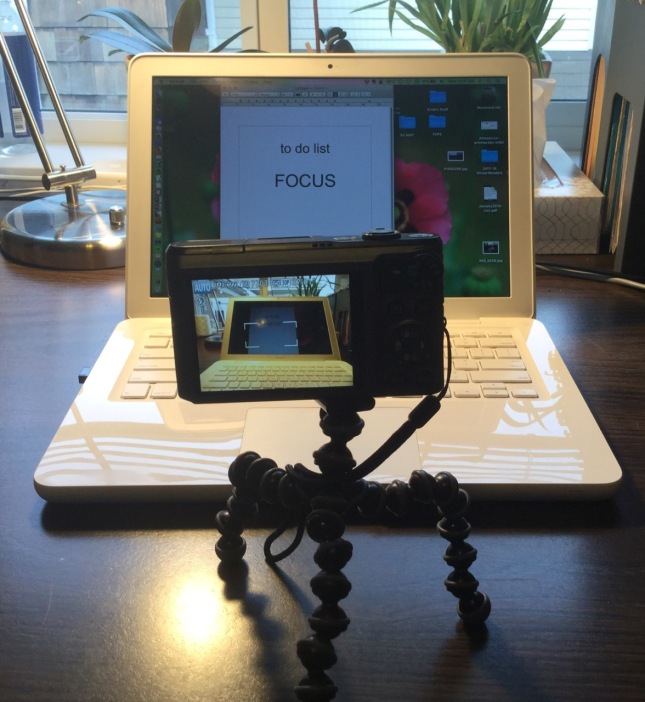 So there you have it, folks. My word is FOCUS.

Frankly, I was loath to leave my 2017 word LISTEN behind. So I picked its cousin who is not quite so sensory specific.

The word FOCUS came to me as somewhat of a lifesaver over the last few weeks. On November 1st, my husband had hip replacement surgery. My broken hip experience of 2014 sure came in handy here as I knew what to expect. Still, on some days the compounding of caregiving and household responsibilities together with Christmas almost bowled me over.

When I began to feel overwhelmed, I would calm myself with self-talk like: “Just do the next thing” and “Focus.” That attention to the moment and refusal to give in to distraction helped me stay on top of things through the first weeks of hubby’s recovery.

He’s well on his way back to normal now and Christmas is over. However, I’ve decided I want to hang onto FOCUS a bit longer applying it to my work, my relationships, my leisure, and my spiritual life.

The Bible passage that I’ve chosen as my focus true north is Philippians 3:13,14:

To me this means living a life of purpose that will be effective in its trajectory because of its focus on the things that matter. 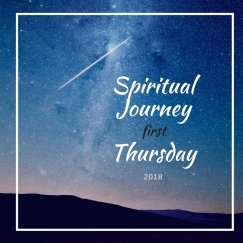 This post is linked to Spiritual Journey Thursday, hosted today by Margaret Simon on her blog Reflections on the Teche. There you will find links to more 2018 one-little-word reveals. (Thanks, Margaret, for hosting and for making the swank 2018 Spiritual Journey button!)