Today is Canada’s 148th birthday. And this year our flag turns 50!

I’m celebrating by reposting my poem “Flag,” written a few years ago. 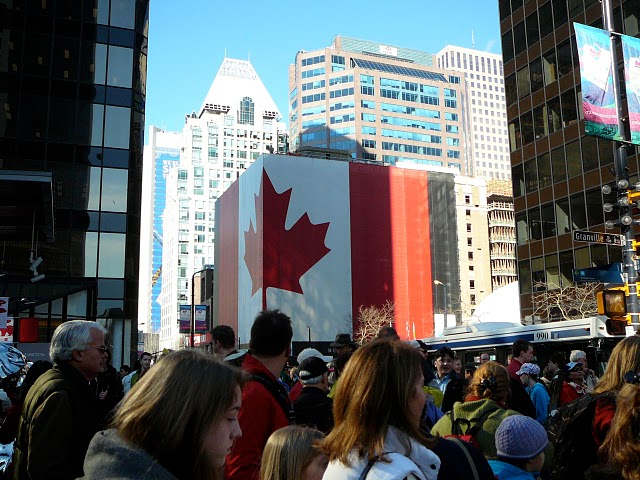 One of Vancouver’s downtown hotels sported a gigantic Canadian flag during the 2010 Olympics. It helped  foster the Canadian spirit which infected  the streets of Vancouver during those fabulous weeks. (Photo © 2010 by V. Nesdoly)

“National flag of Canada
two by length and one by width, red
containing in its center a white square
the width of the flag
with a single red maple leaf
centered therein”*
flies majestic since 1965
over town squares
by cenotaphs and schools
from Cape Spear, Newfoundland
to Beaver Creek, Yukon
Alert, Nunavut
to Middle Island, Ontario.

Proudly raised at Olympics
wrapping the grim coffins of soldiers
feted on Canada Day
marched in to the skirl of bagpipes November 11th
this silk-screened symbol
stitches together
our experience and destiny
sea to sea to sea.

When so plentiful at home you no longer see
till it’s reincarnated into jester caps
umbrellas and wind socks
painted on faces, stamped on T-shirts
decaled onto mugs and beaver pens

abroad even one
grabs your homesickness
like the initials of a sweetheart.
Meet someone with your flag stitched on his pack
and you know he’ll understand Tim Horton’s
hockey, Z that rhymes with “bed”
loonies, toonies, Bruce Cockburn, Diana Krall
Cirque du Soliel, CBC, Air Canad, O Canada.
Sorry, but great is it to have found someone
who speaks your own language, eh?

* Official description of the flag taken from the Public Works and Government Services Canada website.

The Canadian flag had a 40-year gestation. Read the story of its birth HERE.

The first flag was stitched together by Joan O’Malley, daughter of Ken Donovan, who Prime Minister Pearson asked to provide prototypes of the new design for a meeting with the premiers with just a few hours’ notice. The story is HERE.