Posting my Limp sequence has been interrupted by a project that is now all but done. So it’s back to these poems about the mishap I had this spring.

If you’ve ever experienced one event, followed by another, and another, you’ll recognize the feeling of a domino train. This was my experience way back in early April this year. The episode below turned out to be nothing serious, but we do imagine the worst, don’t we!

the day I hurtled down
some stairs, broke something
and thought

What will happen next?
Hope this isn’t
only the first domino.

Surgery left me
with one leg shorter
than the other

Now doomed
to orthotics, a fat-soled shoe
or a forever limp

today I felt a bruise-like
pain, deep
in my calf.

Could it be DVT?
Will this be
the death of me?

Posted by Violet Nesdoly on October 30, 2014 in LIMP sequence, Personal

In Diane Lockward’s June newsletter,* the Craft Tip article “Poetic Sequences: Practice Makes Potential”  by Oliver de la Paz tells of his visit to the Picasso Museum in Barcelona, Spain. On that visit he came across one room where the paintings, drawings, and studies  on the walls, as well as the  sketchbooks filling a table were all remarkably similar in texture and colour. That’s because they were all studies of the same subject—the painting Las Meninas by Velazquez.

La Paz likens these artist studies of Picasso’s to what poets do when they write sequences. He says, “By writing a series or sequence of poems on a singular subject, we can create a volume of individual poems that are at once independent and in dialogue with adjacent poems in the series or sequence. These are generative exercises—painting studies and sequential writing.”

Two advantages la Paz sees in writing sequences:
1. They allow for a close study of a subject from different angles and perspectives, at different times of day, in different seasons, through different moods etc. (depending, of course, on the subject).

2. One doesn’t have to “mine for” a different subject every day. He says, “I’ve found that working in sequences frees me from obsessing over a blank page. Psychologically, I’m prepared to work with content that has already been worked over.”

The power of sequences came to my attention even before I read the newsletter article when I judged a poetry contest a while ago. Though the entries had no names on them, I suspected several were by the same person because they were about the same subject. The subject was a certain creek. The first poem about the creek didn’t strike me as particularly strong. But as I read the second and third poems about the same location, I saw how these “studies” fortified and bolstered each other, the whole becoming greater than the sum of its parts.

I have found myself naturally circling back to some subjects in my own writing,  perhaps because they were new experiences for me and writing about them helped me understand them better. The death of my mother was one such. So was my broken hip this spring. Beginning in March, when I was newly recovering, to April’s poem-a-day challenge, and on, I wrote quite a few poems about my unaccustomed state.

The other day I collected them and found they were a sequence of sorts. I’m going to be sharing them here over the next little while (though not arranged in the order I wrote them).  I call them my LIMP sequence. As in the poems about the creek, when these LIMP poems appear with others of the same subject they seem more complete than they do as individual poems. So, welcome to my LIMP sequence! Below is the first one. 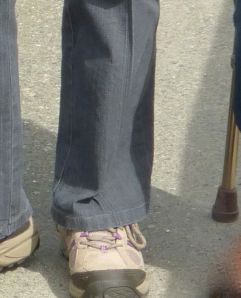 Jacob wrestled with an angel
I fell down some stairs.
The surgeon plated, screwed it
but I was unawares
somehow he took a bit off
I now walk with a limp.
Does God bestow a blessing too
with this gait that’s gimp?

*You do know about Diane Lockward’s excellent newsletter, don’t you? It comes out every month with a prompt, a craft tip, a writing-book tip and other goodies. If you don’t subscribe, you know you should. (You can subscribe in the right sidebar of her blog Blogalicious.)

**The Bible story is that one night Jacob wrestled with an angel, the angel injured Jacob’s hip, and Jacob wouldn’t let the heavenly being go until the angel blessed him. Jacob did get the blessing but along with it came that lifelong crippled hip.

By the way, I’m walking just fine these days, the cane long retired. Even the limp is growing less noticeable every day!